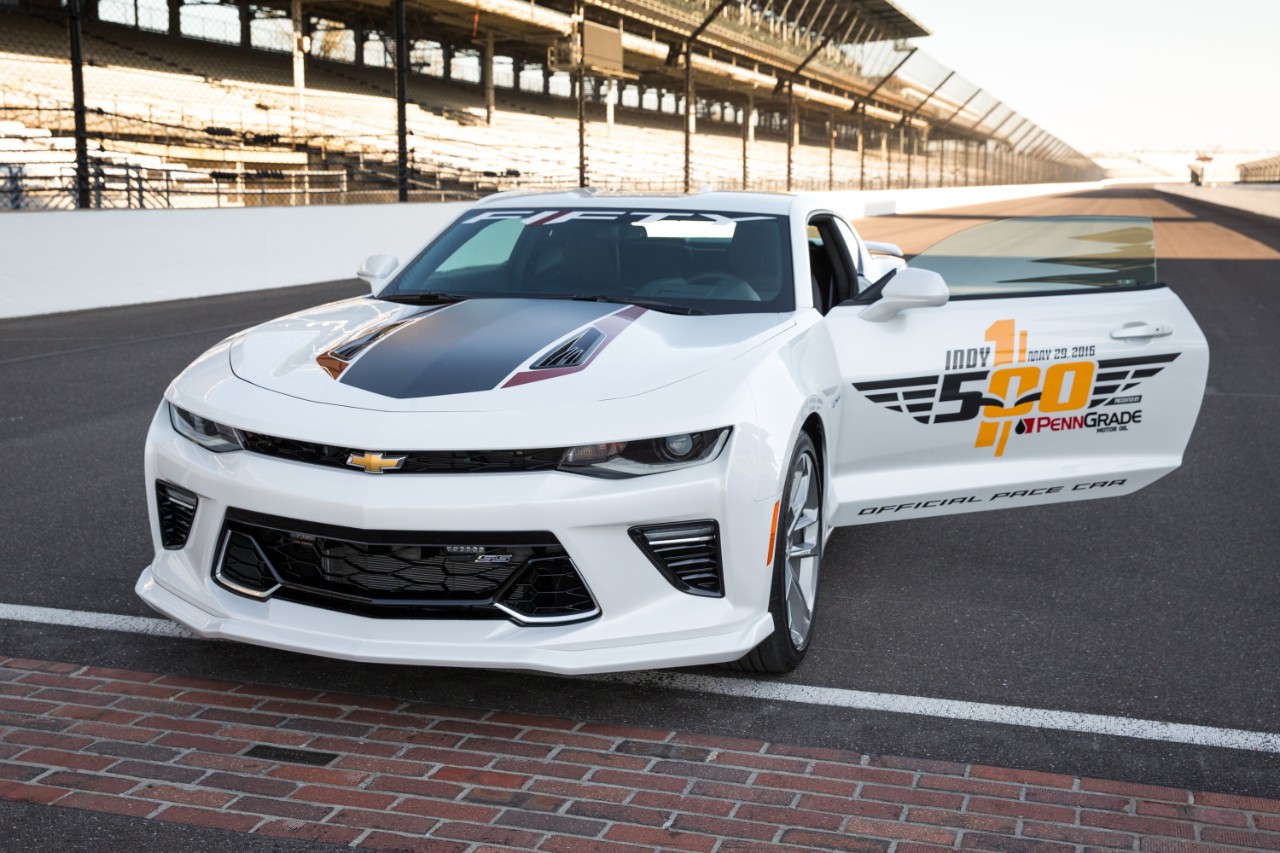 INDIANAPOLIS – A unique version of the new, 2017 Camaro SS 50th Anniversary Edition will lead the 100th running of the Indianapolis 500 next month, driven by motorsports legend Roger Penske, who is marking 50 years as a race team owner.

It’s the ninth time Camaro has served as the pace car and the 27th time for Chevrolet, dating back to 1948.

“Chevrolet and the Indianapolis 500 have a long, storied history and it’s an honor to mark the respective milestones of the Indy 500 race and the Camaro simultaneously,” said Mark Reuss, executive vice president of Global Product Development and Global Purchasing and Supply Chain. “It’s also a privilege to have Roger Penske perform the driving duties, as his team has helped Chevrolet earn four consecutive IndyCar manufacturer titles since 2012.” 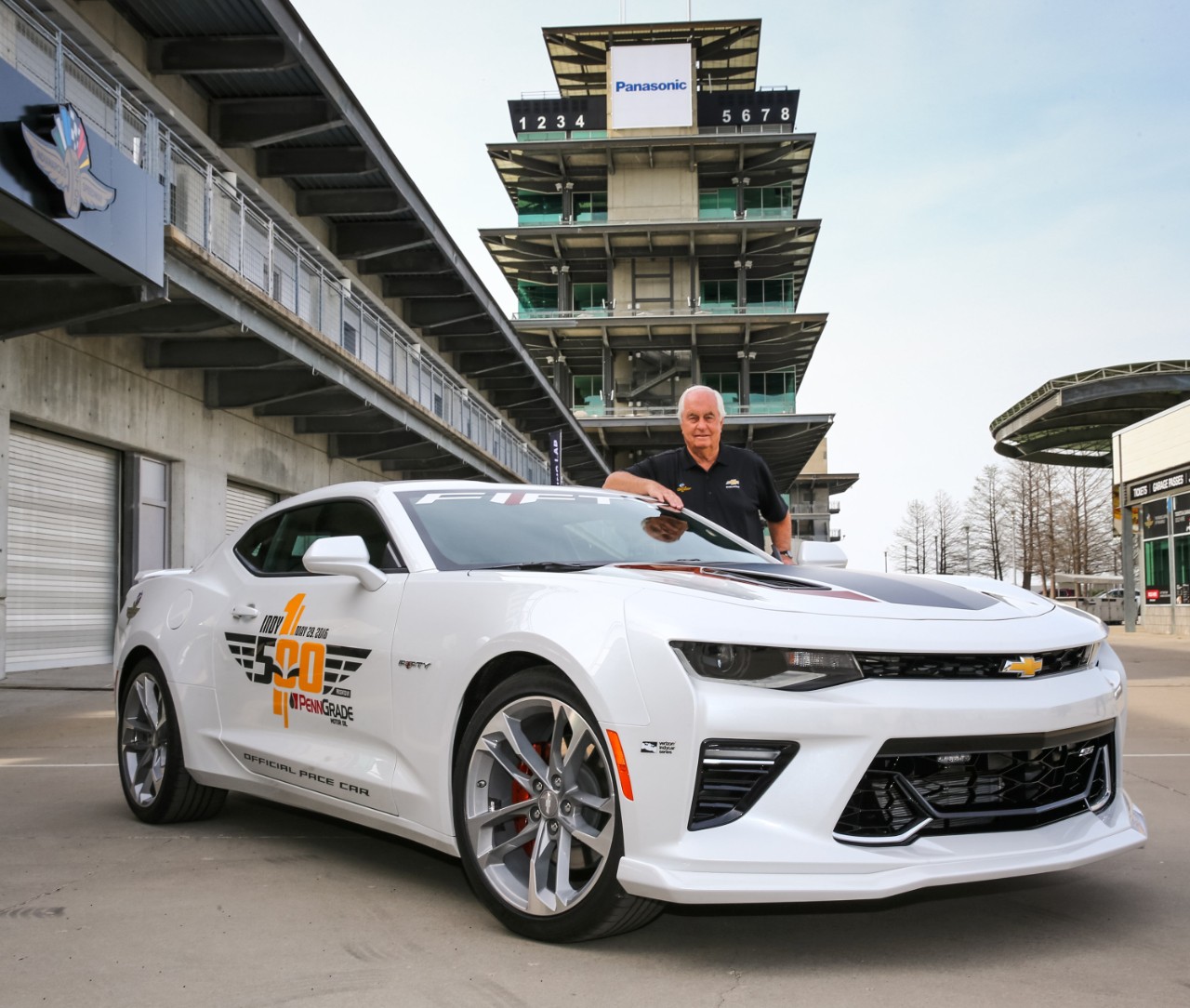 Four identically prepared pace cars will support the race, all with exclusive Abalone White exteriors featuring “100th Running of the Indianapolis 500” graphics on the doors and the iconic Indianapolis Motor Speedway wing-and-wheel logo on the quarter panels. They also incorporate the exterior cues and graphics that are unique to the Camaro 50th Anniversary package that goes on sale this summer.

With 455 horsepower on tap, the Camaro SS pace cars require no performance modifications to lead the racing field.

“Chevrolet and Roger Penske are inextricably linked to the heritage of the Indianapolis 500,” said J. Douglas Boles, president of Indianapolis Motor Speedway. “When he leads the pack on May 29, behind the wheel of the Camaro SS, he will drive the race into its next 100 years and strengthen the bond Chevrolet and Indianapolis forged a century ago.”

For 2016, Chevrolet drivers will be looking to build on last year’s results of the “Greatest Spectacle in Racing,” when the top four finishers were Chevy-powered, led by race-winner and Team Penske driver Juan Pablo Montoya. It was his second Indy 500 victory and the 16th for Team Penske.

No other racing team has recorded more wins at the Brickyard than Team Penske, and it started with driver Mark Donohue’s victory in 1972. Penske and Donohue established their relationship six years earlier, when Penske transitioned from driver to team owner. They quickly found success in SCCA’s Trans-Am Series, with Donohue piloting an early Camaro Z/28 racecar, winning three of 12 races in 1967 and 10 of 13 in 1968.

Penske tackled the Indy 500 for the first time in 1969, while still campaigning a Camaro in Trans-Am. Donohue was his driver for both series. Later, racers including Mario Andretti, Al Unser and Rick Mears drove for Penske, with Mears winning four Indianapolis 500 races and helping solidify Team Penske as an Indy powerhouse in the 1980s. That legacy advances this year, as Roger Penske seeks his 17th Indy 500 title as a team owner.

The specially prepared Abalone White pace cars differ in exterior color, but share the Anniversary Edition package’s stripes and other content features, including: 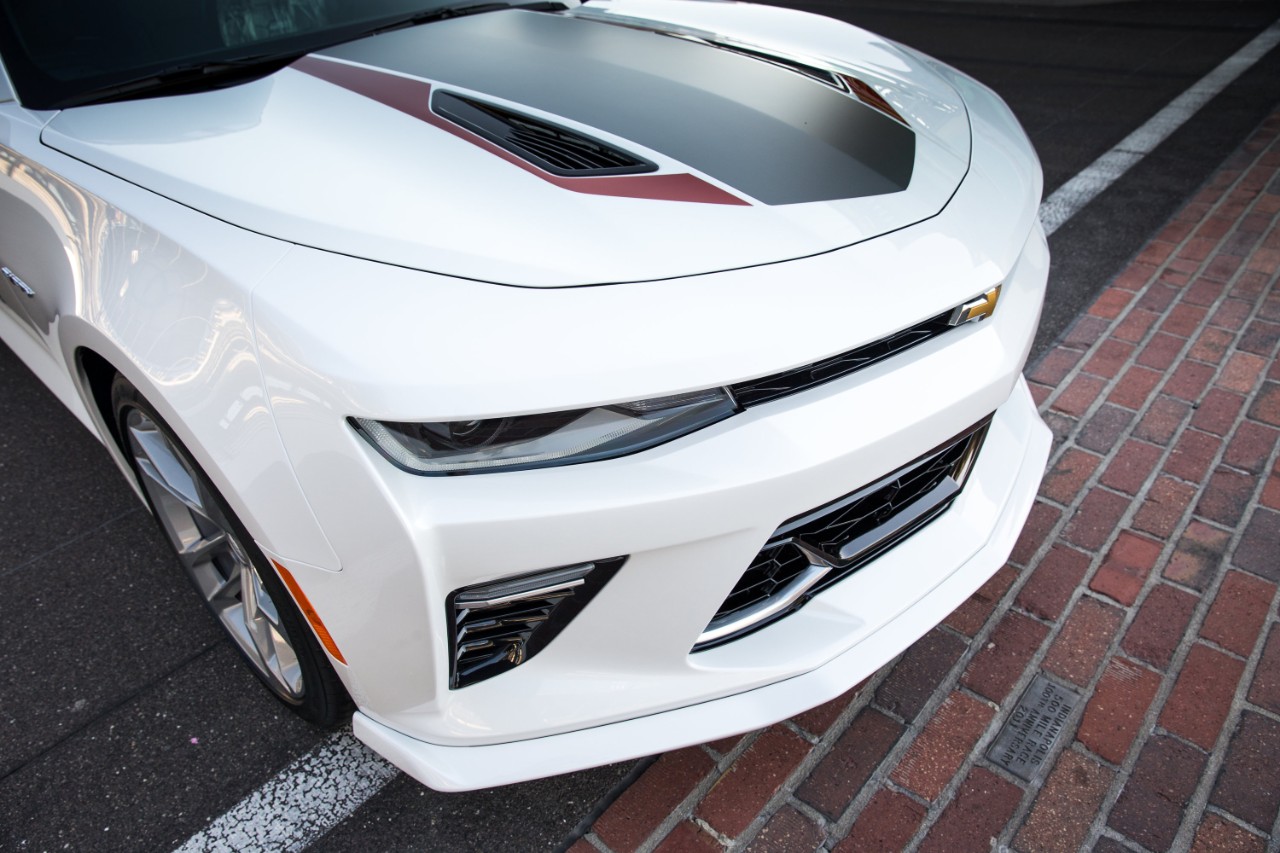 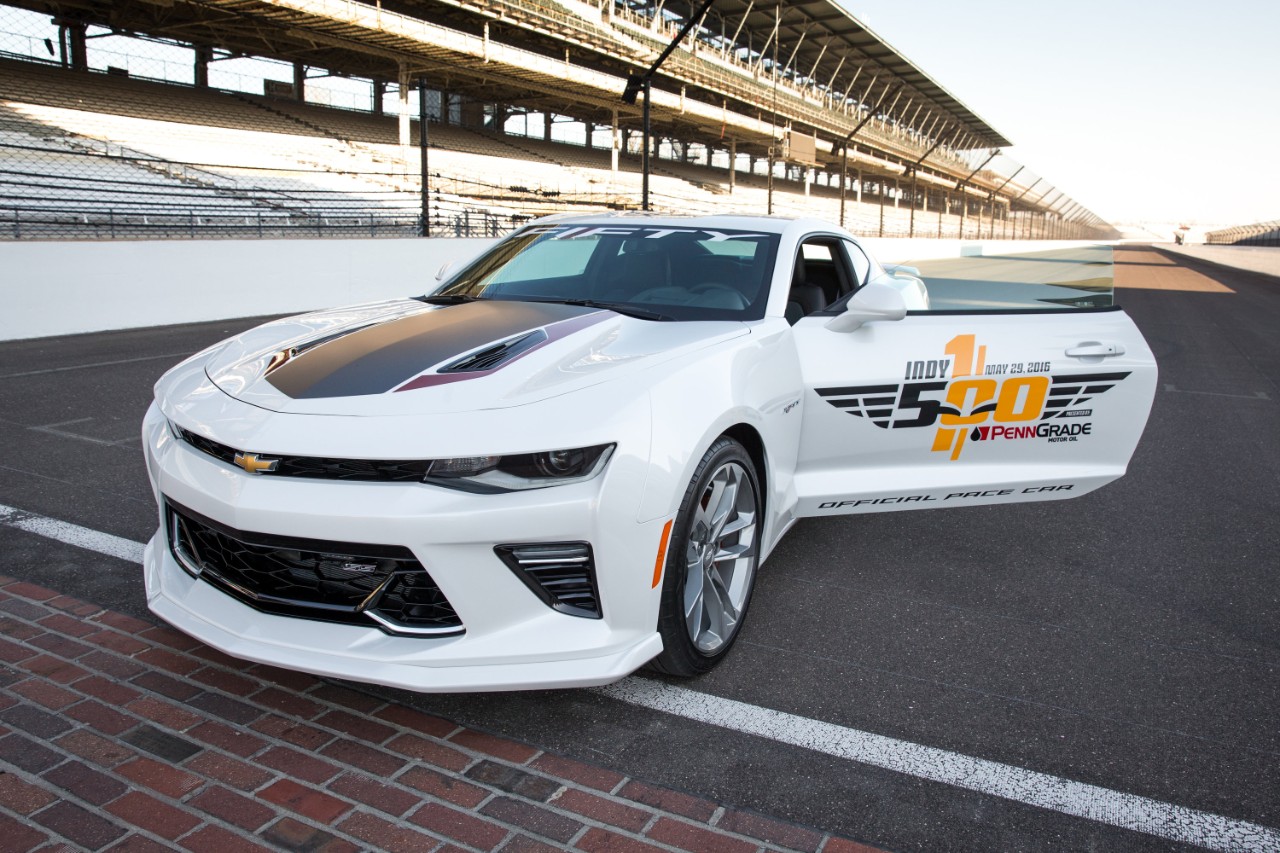 Camaro pace cars through the years 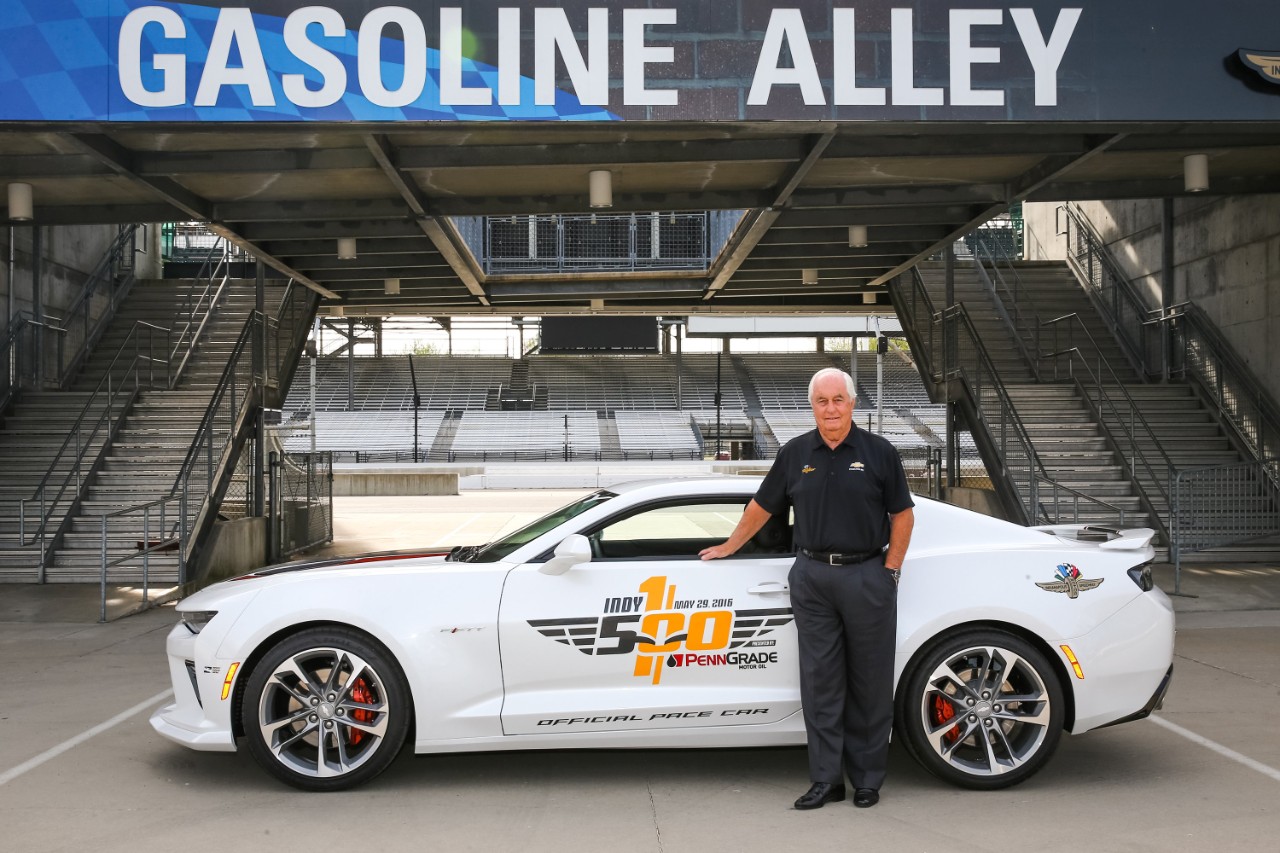 One Thought to “50TH ANNIVERSARY CAMARO SS TO PACE INDIANAPOLIS 500”