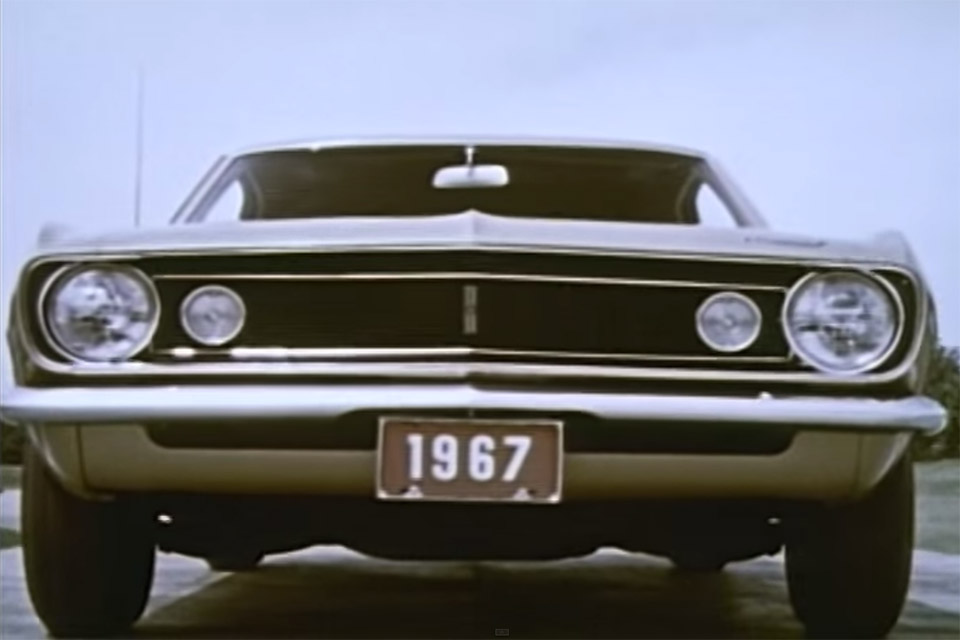 The Chevrolet Camaro is Born

The following article was written by our good friend Scott “The Fbodfather” Settlemire back on June 28, 2011 to tell the story of how Camaro got it’s name and to celebrate it’s Birthday.  Enjoy.

June 29, is an important date in Camaro history – it’s the date that the Camaro was actually “Christened”………….

The other important date would be September 29, the day that Camaro was shown to the public at large in Chevrolet Dealerships nationwide and was finally offered for sale.

I’ve posted this story before to several sites – but I’m gonna dust it off and send it again to celebrate Camaro’s 45th ‘Christening’………..

The day the Panther Died………

June 29, 1966 was a day of firsts. It was a day where 200 journalists were inducted into SEPAW (more about that in a minute)

That day, the first and LAST meeting of SEPAW took place.

It was the first time in history that 14 cities were hooked up ‘real time’ for a press conference via telephone lines. (Something that seems so very simple today, but so very complicated back then……)

And it was the first time that the world found out that a new Chevrolet would be called “Camaro” – rather than “Panther.”

On June 21, 1966, approximately 200 journalists from around North America received the following Telegram:

“……….Please save noon of June 29 for important SEPAW meeting. Hope you can be on hand to help scratch a cat. Details will follow……………….(signed) John L. Cutter – Chevrolet Public Relations – SEPAW Secretary.”

……….as you can imagine, there were many befuddled looks upon receiving such a telegram.

The next day, (June 22) – the same journalists received this telegram:

Well………that certainly gave the journalists something to think about…..and the best part is that they would not have to travel around the country to attend this “SEPAW Meeting” – rather, they only needed to travel to one of 14 cities.

This was truly a technological undertaking…..

The Bell System (the only telephone system back then for those of you who are under 40 years of age….) call arrangement included 14 cities and originated from Detroit’s Statler-Hilton Hotel (sadly demolished a few years ago after sitting in ruin for nearly 25 years) where Chevrolet General Manager E. M. “Pete” Estes made some announcements.

There were more than 100 persons involved in providing the two-way communication system over 13,715 miles of telephone circuits, including 9,259 miles of microwave radio and 4,446 miles of coaxial cable.

The announcement over the wires was heard by approximately 150 of 200+ journalists in the cities of: Atlanta, Boston, Buffalo, Chicago, Cincinnati, Dallas, Denver, Los Angeles, St. Louis, San Francisco, New York, and Washington.

Amplifiers and microphones were installed in each of the 14 meeting rooms across the country so that newspersons could hear Mr. Estes’ remarks and direct questions to him. The questions and answers were heard simultaneously in all cities on the circuit.

GM was insistent that the system be tested – so a test call was made on Tuesday and was further backed up by an auxiliary circuit in case difficulty developed anywhere within the system.

It’s interesting to note that we think nothing of linking friends on a conference call at will from our homes or offices – without any real forethought. It was a different world 45 years ago…..and as you can see by the above figures – it was quite an accomplishment.

The REAL story, however, was in what Mr. Estes was about to tell the journalists.

Looking through notes that survived 45 years within Chevrolet files, I’ve managed to put together some of what Mr. Estes talked about that day.

“……..SEPAW stands for the S ociety for the E limination of P anthers from the
A utomotive W orld – and by your presence, you are automatically charter members…………July 1 marks my first anniversary (As General Manager of) Chevrolet. It’s been a fast and highly competitive year……..’

He went on to mention the many travels he made to dealers and plants – and mentioned milestones such as the 3 millionth Los Angeles produced Chevrolet passenger car—and the first passenger car to roll off the newly opened Lordstown, Ohio assembly plant.

Mr. Estes continued with: “………..it is also a year in which Chevrolet has gotten into the hottest sales race since 1959……”

He gave a brief review of sales, model-year-to-date sales lead, and talked about his optimism for great June sales figures. He made it very clear that Chevrolet intended to remain America’s number one selling cars and trucks.

“………one of the reasons we’re going to stay number 1 is also a reason for this meeting. Chevrolet is definitely going to have a new car included in the new models for the 1967 model year – and this car will be introduced on September 29, 1966………….This is NOT news to many of you! As far back as April 8, 1965, A Detroit newspaper had page-one headlines proclaiming that Chevrolet had a “Panther” car to answer the horsy offering of a competitor. The question of who was answering who has been discussed frequently, since the four-footed competitor really answered the Corvair. And the Corvair actually followed up the Corvette which was the real pioneer of the sporty-personalized car in this country…..”

“…..in the two years since then, you gentlemen of the press, radio, and television have literally designed, built, and marketed the Chevrolet “Panther” to the point were we get irate letters from customers plus phone calls demanding all specifications and price so they can place orders!”

Mr. Estes continued: “………We have frequently said ‘what Panther?’ and there have been many other names suggested ….citing Chevrolet’s preference for names starting with the letter ‘C’…………..”

“………….the personal sized car market is big …..” He went on to give current market figures and projected figures. “…….Corvair will remain in this market …….handing the family-type small car business……..” “…….with the 1967 line, Chevrolet will offer what we feel is the last word in personal sized cars……” He went on to describe the size of this new car in terms of comparison to both Corvair and Mustang – and some general details.

He announced that this new Chevrolet would be built in two assembly plants – one in Los Angeles (Van Nuys) and one in the suburbs of Cincinnati, Ohio (Norwood.) He also mentioned that Chevy II production would be switched to Willow Run (Ypsilanti) Michigan where they would be built alongside Corvairs.
He then invited all news people to drive this new Chevrolet – and in fact all of the new Chevrolets at a Press Preview in Detroit on September 12 and in Los Angeles on September 19.

Mr. Estes then said: “………..Oh yes! I almost forgot! The purpose of this meeting! Gentlemen: much as we appreciate the tremendous publicity given “Panther” we ask you to help scratch the cat once and forever. And as such, this will be both the FIRST and LAST meeting of SEPAW.

“…………Chevrolet has chosen a name which is lithe, graceful, and in keeping with our other car names beginning with the letter C ……..Above all, it is the name of our new car line to be introduced on September 29……..and to us, the name means just what we think the car will do: GO! ….and here it is!……..”

At that moment, five very pretty girls came onto stage – each holding a letter……Mr. Estes held the sixth letter – and while a narrator described to out-of-towners what was going on, Mr. Estes placed each girl in order and then lined up with them for all to see the word “CAMARO.”

CAMARO – what does it mean?

Once again, Mr. Estes repeated some of his earlier remarks:

“….the name CAMARO means ‘friend’ – ‘pal’ – or ‘comrade.’ Thus, it suggests the real mission of our new automobile – to be a close companion to its owner – tailored to reflect his or her individual tastes and at the same time provide exciting personal transportation. Chevrolet has chosen a name which is lithe, and graceful – and in keeping with our other names beginning with ‘C.’………..thus, it suggests the comradeship of good friends……as a personal car should be to its owner.”

………and that was the day the Panther died.

Now – many of you may have heard me talk about this day at various Camaro and Firebird shows. For those of you who have not heard this story, I believe it merits repeating: I often wonder, as Mr. Estes picked the name “Camaro” from a list of over 2,000 words – a name that means “Friend, Pal, or Comrade” — I just wonder: Did he EVER imagine that this wonderful car – would bring so many ‘friends’ together all because of the love of the Camaro?

When asked a year later how he came up with the name “Camaro” – Mr. Estes laughed that he locked himself in a closet and he came back out with Camaro! His son Bill – our Chevrolet Dealer in Indianapolis tells me that he and his father discussed four different names with the rest of the family at dinner one evening….and Mr. Estes chose Camaro that very evening – because the name meant ‘friend.’

One Thought to “The Chevrolet Camaro is Born”