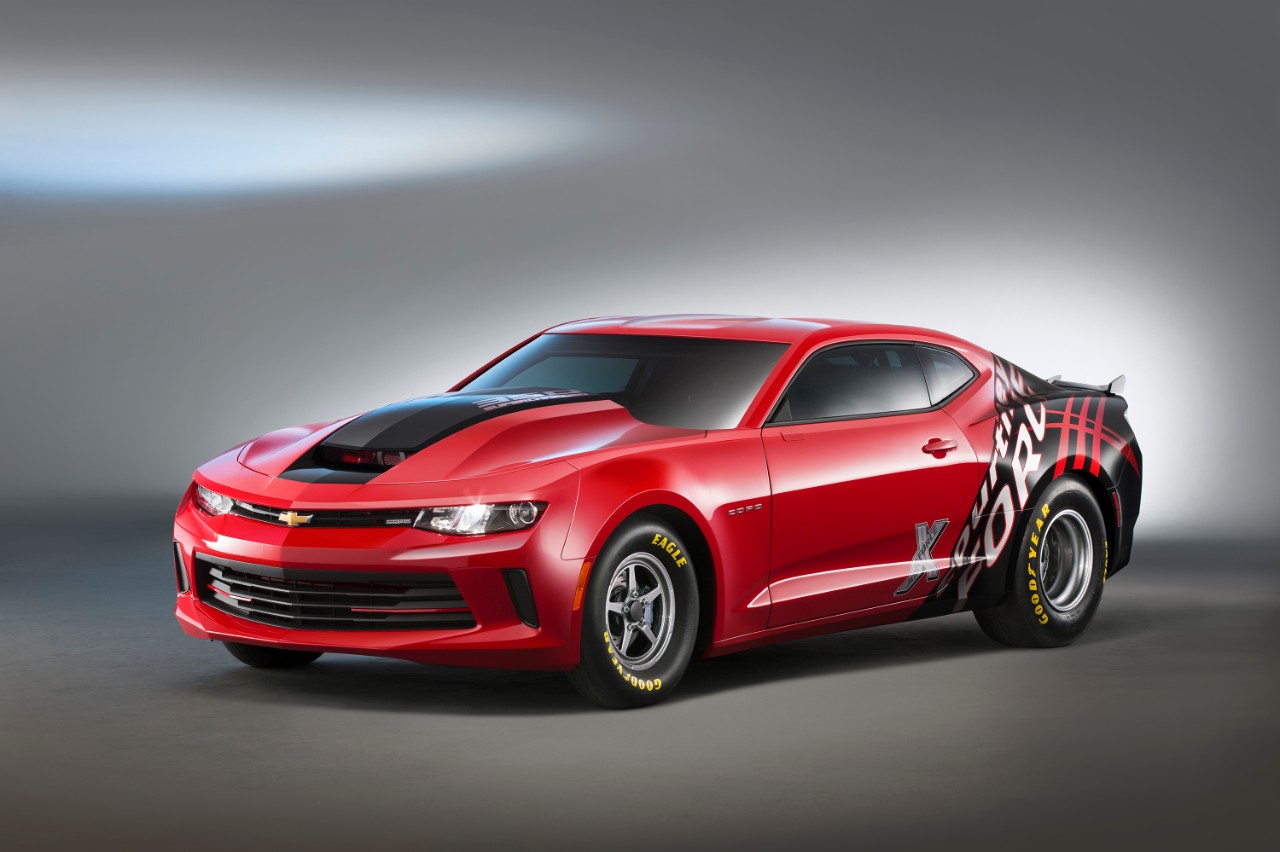 Courtney Force-designed show car to be auctioned for United Way

After visiting the COPO build center, Force collaborated with Chevrolet designers to create a custom appearance for the 2016 COPO Camaro SEMA show car. It will be auctioned at a Barrett-Jackson sale in 2016, with the proceeds going to United Way.

Chevrolet will build 69 COPO Camaro race cars for 2016, extending the production legacy that began in 2012 with the fifth-generation Camaro. Like the previous editions, the new COPO Camaro is designed for NHRA’s Stock and Super Stock Eliminator classes. 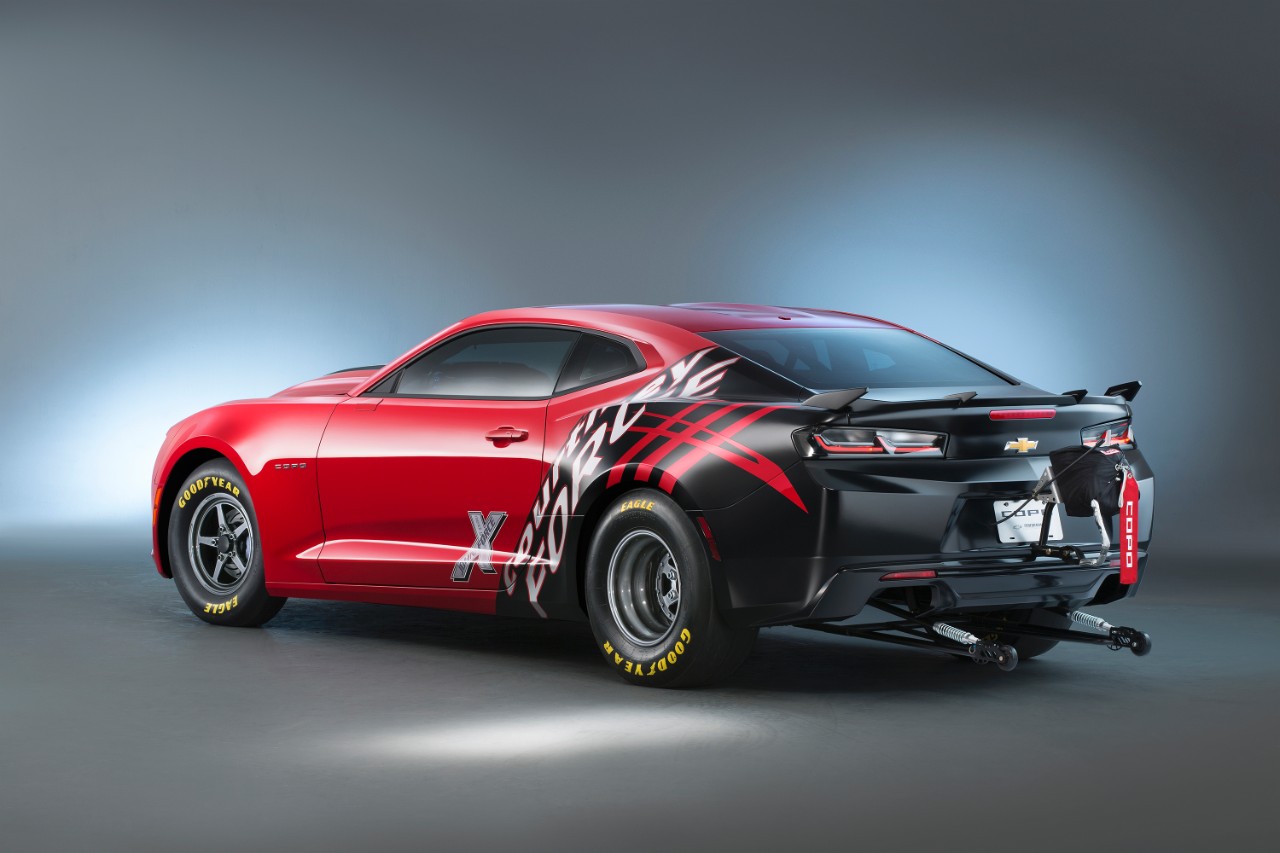 “With the new Gen Six Camaro as its foundation, the 2016 COPO Camaro begins the next chapter of an historic racing legacy,” said Jim Campbell, Chevrolet U.S. vice president of Performance Vehicles and Motorsports. “It’s great to have Courtney Force on Team Chevy and to work with her on the design of the new COPO Camaro show car. Most important, her effort will help raise money for a great cause.”

The 2016 COPO Camaro benefits from the lighter and stronger body structure of the Gen Six. Extensive computer-aided engineering helped increase structural rigidity by 28 percent, while the body-in-white mass was reduced by 133 pounds (60.5 kg).

Less mass and greater strength, along with the body’s sleeker profile in the wind, will help give racers an edge. It offers greater aerodynamic performance than the fifth-generation Camaro.

The show car features a Red Hot exterior color with Courtney Force-signature graphics and red-accented grille trim. Under its carbon fiber high-rise hood is a concept 350 racing engine with a Whipple 2.9L supercharger.

“I was extremely honored to work with Chevrolet and help design the 2016 COPO Camaro we unveiled today at the SEMA show,” said Courtney Force. “The bright red color and the signature slash marks towards the back on the car bring a part of my Traxxas Chevrolet Camaro Funny Car to the COPO Camaro, which I think is really cool. The proceeds from this car go to a great cause and benefit the United Way Foundation, so it’s an awesome project all around.”

The car’s exterior cues also include wheelie bars and a parachute, along with Goodyear racing tires mounted on Weld lightweight racing wheels.

The production COPO race cars will be fitted with racing chassis and suspension components, including a unique solid rear axle system in place of a regular-production Camaro’s independent rear axle. Details include:

When it comes to horsepower, racers can select from a variety of supercharged and naturally aspirated LS- and LT-family engines based on their intended NHRA Stock and Super Stock classes, including a supercharged 350 (5.7L), a naturally aspirated 427 (7.0L) engine and an all-new LT-based 376 (6.2L) engine. The engines are backed by a racing-prepped Turbo 400 three-speed automatic transmission.

Each COPO Camaro race car is built by hand starting with production hardware, including the same body in white used for production models.

Racers interested in purchasing one of the 69 2016 COPO Camaro race cars must register atchevrolet.com/performance/copo-camaro. An independent third-party will randomly select purchasers from the pool of interested customers.

Enthusiasts can also follow updates on the 2016 COPO Camaro program at theBlock.com.

The new COPO Camaro show car is one of more than 20 Chevrolet concept and production vehicles on display this week at the SEMA Show.

For more information go to: http://media.chevrolet.com/media/us/en/chevrolet/autoshows/2015/sema.html

Join the social conversation at #CHEVYSEMA.